The High Level ski-tour, from Chamonix to Zermatt 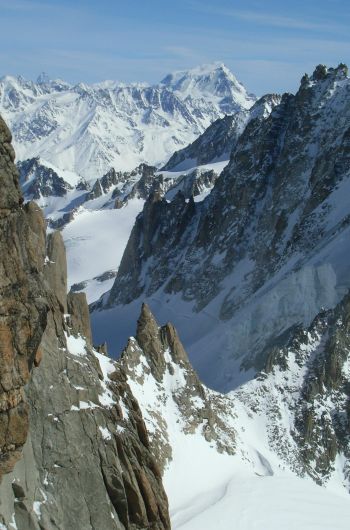 The Col du Chardonnet, looking east to the Grand Combin and the Matterhorn

The Haute Route is a very special high-level ski journey through the mountains that connect the Mont Blanc Massif with the Swiss Valais, attempting to travel along the literal backbone of the western Alps that forms the formidable natural barrier between Italy to the south and France and Switzerland to the north.

It is often the first hut-to-hut ski-tour to capture the imagination of many a ski-alpinist, yet it is a tough challenge that should not but under-estimated just because it happens to be popular.

For it is a journey that requires the skill of the off-piste skier and of the mountaineer, as well as much fitness, endurance and commitment. You need to be able to ski all sorts of off-piste snow, up-hill skinning for a number of hours on some days, requiring you to be able to kick-turn and use your couteaux (ski-crampons), be able to walk in crampons and carry an axe, to keep going for over a week, staying mostly in mountain huts and carrying all your equipment for the journey.

Traditionally, the tour starts in Chamonix and finishes in Zermatt, linking the two great centres of skiing and alpinism of the western Alps. How you link these two towns is up to you; it is possible to make the journey as simple or as complicated as time and ability allow, and it certainly will be determined by the prevailing snow and weather conditions during the tour. Therefore, it is also prudent to realise that one or two extra days help massively in the overall success of a Haute Route tour, allowing for those poor weather days where the touring team may find themselves unable to escape from the hut for a day or two! 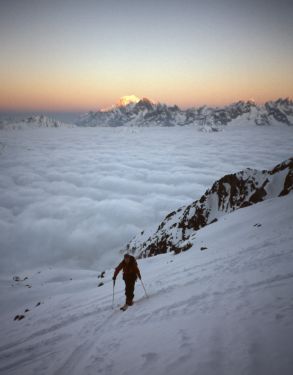 Dawn above the Cabane de Valsorey, on the Classic HR

This route can be split up into distinct stages that may take one or more days to complete.

Stage 2 The High Level Route is started from Argentière by using the Grands Montets lifts and then skiing down and across the Argentière glacier. Then there is the choice of ascending either the Chardonnet or Le Tour glaciers to eventually arrive, at the end of a big day, at the Cabane du Trient at 3170m. 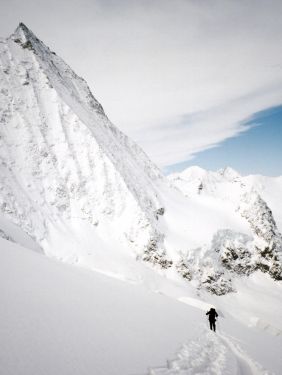 Stage 3 From the Cabane du Trient there is a long ski descent to the village of Champex, from where you take a taxi to the Verbier ski area to access the Mont Fort hut at 2457m. It is also possible to continue on to the Prafluri Refuge at 2981m directly or to spend a second day journeying to it via a climb of the Rosablanche at 3386m.

Stage 4 From the Prafluri Refuge there is a short skin up to the Col de Roux, before descending to the Lac des Dix, and enjoying a scenic skin alongside the lac which is followed by steeper terrain up to the Cabane des Dix.

Stage 5 An early start enables the traverse the Pigne d’Arolla 3796m and one of the highpoints of the tour. From the summit on a clear day we can see the Matterhorn, Mont Blanc, the Dent Blanche and many other majestic peaks that define the Alps. From here we descend to the amazingly situated Vignettes hut at 3194m.

Stage 6 Potentially the longest day on the tour, so an early start! From the Vignettes hut we travel over 3 cols and onto to our final descent to Zermatt passing under the incredible North Face of the Matterhorn.

However, this journey can easily be spread over 2 days, staying in the Bouquetins Refuge en-route, stopping off in Arolla or calling in at the Bertol Refuge.

So, with a good level of fitness and good fortune with the weather, it is possible to do the Haute Route in 6 days – with a day either side for travel to Chamonix and from Zermatt. This certainly helps the tour fit in with available holiday time, yet if an extra day or 2 can be added, the tour would be more enjoyable and have a greater chance of overall success.

A fine view from the Col du Serpentine

The start and the ending are the same as the Popular Haute Route; it’s the bit in the middle that’s a bit trickier.

Optional on this tour is whether you have the time and the means to continue touring at a ‘high level’ from the Cabane du Trient area all the way round to the Cabane de Valsorey. Immediately you sense the remoteness of being off the beaten track, crossing a number of cols as you traverse around the Grand Lui before a good ski descent down to La Fouly. 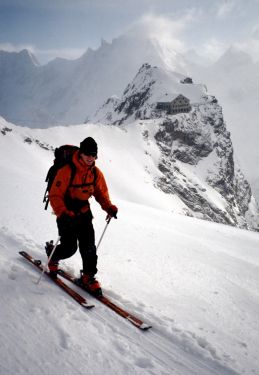 Setting off from the Cabane des Vignettes

The next 2 days take in the Grand St Bernard Hospice (an easier day), then a there’s a big trek up and around the slopes to the west and north of Mont Vélan, before the final big climb up to the Cabane de Valsorey. These past 3 days can be avoided by taking the afore mentioned ski descent to Champex and take a taxi to Bourg St Pierre, from which you are still faced with a monster six hour climb to the Valsorey, 3030m.

Compulsory, however, on the Classic tour is the section beyond the Cabane de Valsorey which seeks out the only way possible to tour to the south of the big mountain mass of the Grand Combin. Crossing the Plateau du Couloir at 3661m is a serious prospect; it is often icy and feels exposed. It is very likely that skinning will turn to carrying skis and cramponing to finish the final section to the col. From here begins the descent to the Cabane de Charion, 2462m with some interest along the way.

After this section there is a bit of a long haul up one of 2 glaciers to reach the Cabane des Vignettes although one of these choices does take in the beautiful high point of the Pigne d’Arolla and make a day that is in keeping with the rest of the tour.

With the final day to Zermatt, and the potential to continue on to Saas Fee, the Classic Haute Route does involve a series of consecutive, big and challenging days, many of which are of up to 8 hours of duration with ascents of over 800m. If this does sound like your sort of challenge, I hope you will give it a go one day!

Guide to client ratio  1:6 for all variations of the Haute Route, with the exception of the ‘Classic’ which is 1:4

It’s worth spending as long as possible on the Haute Route, the options for which have been described already above.