A great focus for your your first or subsequent trips to the Alps. Climbing the 4000m peaks takes you into some of the finest areas of the Alps where building on previous alpine mountaineering experiences you can tackle the various challenges that they present.

Approaching the summit on the Mönch, Bernese Oberland

The three mountain areas described below are great for having numerous peaks to try within a single area, either from a central valley base or linked together over a number of days. 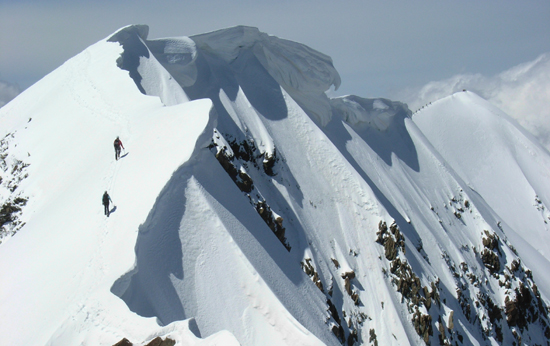 The final section of the Breithorn traverse 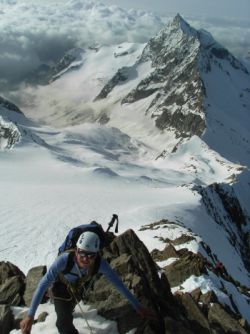 The South Ridge on the Weissmies

The Saas Tal – Saas Fee and the Saas Grund peaks

The high peaks around the Saas Tal are a good place to get established as into good peak-bagging with numerous 4000m peaks to choose from, many with useful nearby lift installations to help with the approaches! Great peaks however, some predominantly glacial approaches, some have more technical interest with simple rocky ridges. Supported by good mountain huts and a friendly valley base.

The peaks to choose from: Lagginhorn and the Weismeis to the east of the Saas Tal, the Strahlhorn, Rimfishhorn, Allalinhorn and the Alphubel are easily accessed from Saas Fee.

The Spaghetti Tour and Monte Rosa

Zermatt makes for a good valley base for many fine mountains, some quite a bit more technical than others! Also you can start and finish from the Italian side of these mountains, in the valley of Gressoney. The Spaghetti Tour, also known as the Italian High Level Route, opts in or out of the peaks on the Swiss/Italian border. 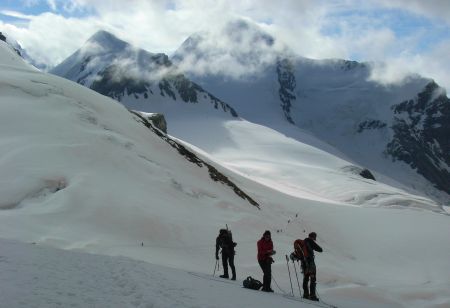 The glacier approach to Castor and Pollux

There are friendly huts to stay in with good food on both sides of the border, including the Margharita Hut at a staggering 4500m. You’ll be well acclimatised by the time you stay here!

Entirely on glaciated terrain and mostly above 3500m, these peaks make for a splendid high-level journey, and allows for the chance to climb a number of shapely peaks.

For starters there is the Breithorn, Castor and Pollux for you to work on your acclimatising and then rock and ice skills. The twin-summited peak of Lyskamm follows next in the chain. Although this a very challenging mountain to climb and it is popularly traversed by its southern flank, called ‘el Naso’ . This route still requires good cramponning skills but it does connect you with the numerous satellite peaks of Monte Rosa.

A vast glaciated landscape that feels remote and cut off from the outside world. There are many fine peaks, all having a steady climb on glacial terrain and many culminating in an exciting rocky peak. Many of the ‘ways-in’ to these peaks involves a substantial but spectacular walk. There is also the Jungraujoch mountain railway, starting from Grindelwald, which takes you to a height of 3450m; not very aesthetic, but entirely practical! 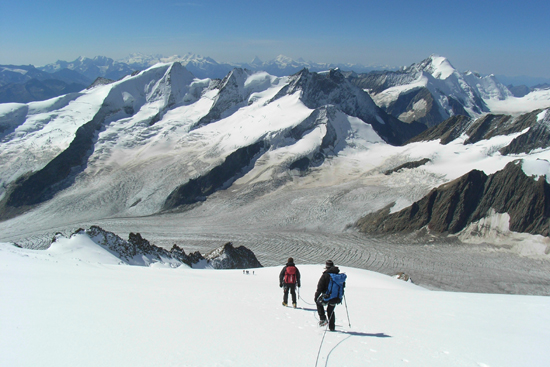 The peaks you have to chose from are the Mönch and the Jungfrau, either side of the Jungraujoch, and then the Gross Grünhorn, the Finsteraarhorn and the Fiescherhorn peaks further on into the wilderness. These peaks are supported by good mountain huts that are friendly and comfortable. The immense Aletschhorn is always visible from this side yet needs to be accessed from the south. It is a remote-feeling expedition to climb this peak, but a splendid achievement when you finally reach its summit.

It is worth setting aside 5-6 days for alpine mountaineering, to allow for acclimatisation and to build on mountain experiences. A typical week would be as follows: