The Quest for Backcountry Adventure

Exploring the back-country on skis is immediate skiing adventure, away from the crowds and the pistes. It is exhilarating skiing on new snow, through trees, down valleys, round ridges and dropping into yet another new slope down the other side.

It’s the variety and the challenge that’s the stimulus compared to being on the piste. The snow, the terrain, the sense of a journey, all from a ski-lift system that just happens to have access to some amazing slopes. 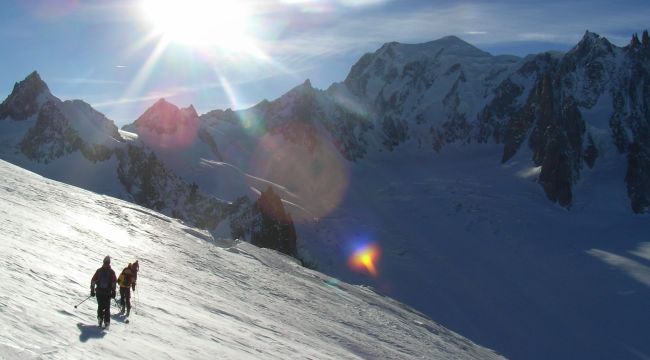 Catching the afternoon sun on the slopes of the Combe Noire

Here in the European Alps, back-country skiing is characterised by the varied terrain you can experience in one day. Long descents that can start high up amongst peaks and glaciers, and finish through forests and villages.

Fields of untracked powder are always a must, with lovely snow you’ll feel like your skiing has suddenly improved! Yet the more you can learn to appreciate other types of snow (although certainly not all!) and start understanding the best way to ski it, the more confident you’ll feel in this environment. 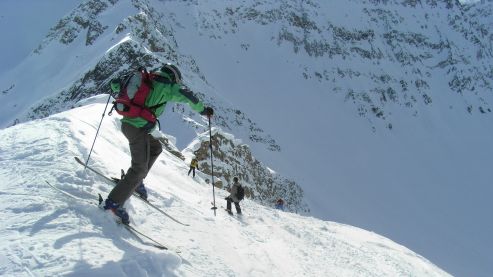 Dropping into the back bowls at Courmayeur

Compared to piste-ed runs, the snow off-piste can initially appear unpredictable, so you learn to trust your reactions to it and develop a strategy to get down each new slope.

Skiing with a Mountain Guide 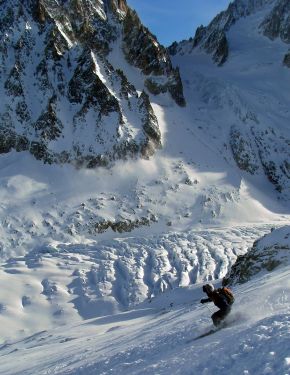 A fine descent to the Argentière Glacier

It can be tricky to know where is best to go, which slopes to choose, all things being considered. With an IFMGA Mountain Guide the best slopes are sought out, always with regards to the avalanche risk, the time of day for the best snow and the ability of the group as a whole.

The make-up of the group can be quite crucial to everyone’s enjoyment of the day. It really helps having folk of similar ability together, unless of course you are a group of friends or family who all want to ski together. If this is the case, it is worth, however, considering having one or two days in your ski holiday just doing the level of skiing you like best.

Technique, speed and fitness are the key factors that influence your skiing performance on off-piste terrain. Feeling confident is everything, and it’s good to feel encouraged and perhaps challenged, but neither rushed nor held back.

Novice/Aspirer Off-Piste Plenty of on-piste skiing experience on red and black runs and want to move onto something new. Or you’ve done a little off-piste already, are getting the idea of it, although still with a fair few tumbles… Want to learn more to really get established in skiing un-groomed snow and getting away from the crowds.

Intermediate Off-Piste You have a reasonable amount of off-piste experience, you have tried and succeeded to ski in a variety of snow types. You can do a number of turns before needing to stop or fall over but you’re still not keen to go too fast.

Advanced Off-Piste You feel confident in a variety of off-piste terrain and able to complete longer descents without tiring and seldom do you fall. You are ready to try steeper slopes, have a good sense of control and technique to really enjoy the whole off-piste skiing environment. 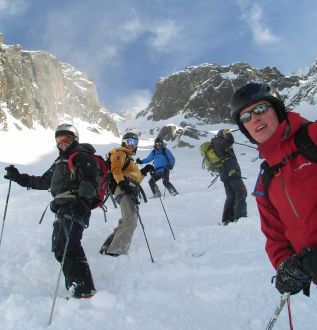 Below the left-hand variation on the Pas de Chevre

So much skiing is at hand in the back-country surrounding many Alpine ski resorts, yet as you do more and more it is likely that your guide will suggest the possibility of great slopes slightly further afield that will require some walking or perhaps ski-touring… Many great descents can be reached with a small amount of booting uphill, skis on shoulder, and this effort is generally accepted because it’s maybe only for up to half an hour, and the reward is very much worth it! 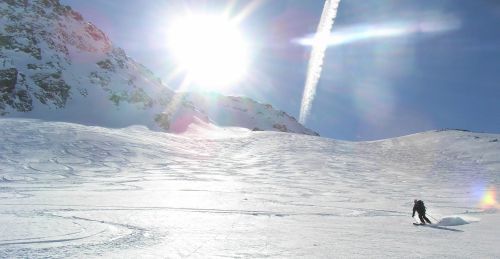 To Tour or not to Tour…? 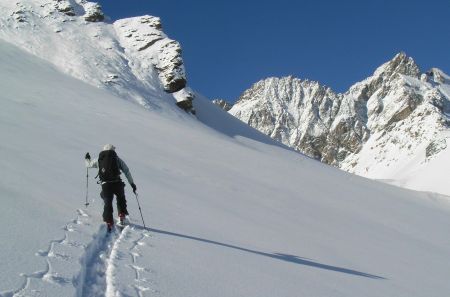 The snow is out there!

As a period of ‘good weather after snowfall’ extends or later on as the winter season progresses, the off-piste accessed only by ski lift starts to get skied-out. But winking at you from across these slopes, are vast fields of untouched snow…The only way to get to them is by ski-touring.

For maybe up to 1½ hours effort a whole new world of potential is open to you.

The transition is often held back mostly down to your preferred ski equipment; you’ve got a fine pair of all-mountain skis, with downhill bindings and ski boots. To hire kit may not be that appealing if you just would rather ski using your favourite trusted kit. 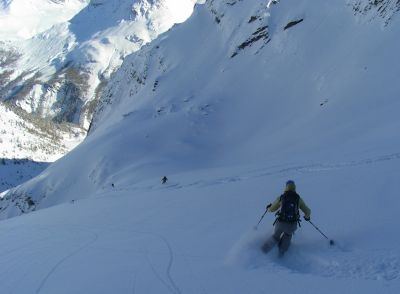 A grand reward for one hour’s uphill effort; skiing near Arolla.

If at all intrigued to experiment however, within the principal off-piste ski resorts, it should be possible to hire from a range of top-notch skis with good bindings that allow  for the option of touring. You would still be able to use your downhill boots as these would work well enough on the uphill sections without too much discomfort.

Investing in new ski equipment is always a rather expensive business, but if you are thinking of changing yours in the near future, it is worth considering at least buying ski boots that take the Dynafit touring binding system. Ski boot design has moved so far in recent years that now the gap between downhill boots and touring boots has virtually closed.

Supportive, technical and lightweight; ski boots that allow for optimum performance but can be used to tour in as well. It’s always worth thinking about! The skis and bindings are then a definite possibility in the future, if and when you get hooked on this more adventurous mode of exploring the back-country.

For myself, as an example, I’ve done all my skiing in the past 10 years on what is essentially ski-touring kit. It gives me more options on the hill to seek the best snow on slope ahead of the crowds. Big fat skis are getting the Dynafit treatment too!

What makes for a great off-piste ski area? The main thing I look for is variety of terrain so that whatever the snow and weather conditions, there’s likely to be somewhere good and safe to ski on the mountain. I’ll be looking for slopes of different aspect, different gradients, open slopes, enclosed gullies, in trees, open mountain and big runs.

For off-piste skiing, it’s good to think beyond just one ski resort; are other ski areas included on your lift pass? What about some of the smaller resorts that are located near the main ones, it can be really worth exploring them. As off-piste gains in popularity it can almost be a victim of its own success, so in depth knowledge of the whole ski area is a real bonus when seeking that perfect snow experience.

The top section of the Pas de Chevre 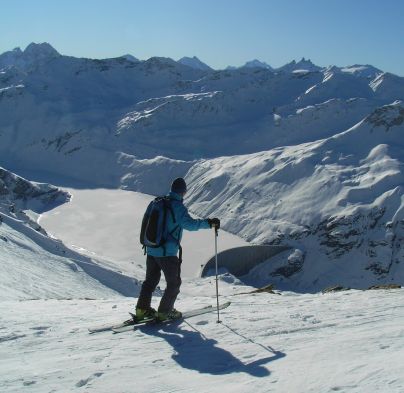 The view from the top of the Zinal skilifts…

Adventurous off-piste skiing from the start! One big lift takes you high up onto the glaciated slopes at the foot of the great buttresses of the Meije. The entire ski area is unmarked and unpatrolled; a real mountain environment.

The village of La Grave is the main valley base. It is in a traditional setting high up in a mountain valley where it captures the fine balance of charm and character, while also providing good evening entertainment as well. A chilled out place to really get stuck in to some great skiing adventures.

The name Chamonix speaks for itself when talking about off-piste skiing. There are the big glaciated descents off the Aiguille de Midi, the big off-piste slopes of the Grands Montets and 3 other lift areas that have great and diverse off-piste skiing as well.

Buy a multi-day lift pass here and it will also be valid for the Helbronner/Courmayeur ski lift systems through the Mont Blanc tunnel into Italy. In a week you could ski in a totally different area every day and with lifts and great off-piste descents on every aspect there’s greater potential for good snow somewhere on the mountain. 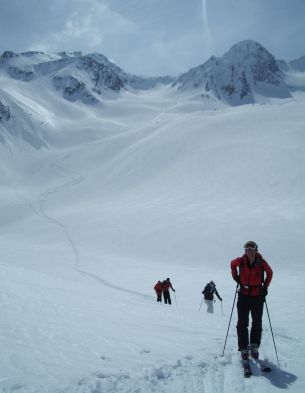 Andermatt off-piste, and a little ski-touring

A vast and popular piste skiing area, where the off-piste isn’t the biggest draw so, for a big resort, the off-piste can be relatively quiet. Good fun skiing amongst rocky peaks and valleys quite separate to the main areas.

The off-piste is the big draw unfortunately for Verbier so it can be busy or get tracked out quite quickly. Good fun though, lots peaks to ski from the top of, with good long descents that all link back into the lift system.

An excellent find, these 3 village ski resorts are all on the same lift pass. Just a handful of ski lifts but the slopes they open up over the back are quite extensive.

Zinal and Grimentz are generally north facing, which is good for the snow, while St Luc catches more sun. The villages are traditional and are quite quiet of an evening if you are looking to party, but you may wish to escape from that anyway…

Similar to Zinal in some respects in that there are just a handful of lifts heading one side of the Gemstock peak, yet they open up the whole mountain to off-piste skiing with good potential for some short ski-tours.

Andermatt is a great little town in the middle of the mountains, that is completely geared up the back-country fraternity in the winter. Definitely worth a visit!

Off-piste days at these great and varied venues. The 3 ski areas are all on the same lift pass when you buy a Mont Blanc Unlimited Pass in Chamonix.

The ratio naturally works best when the team all have a similar off-piste skiing ability, or are happy to all ski together!