Ski-tours for the competent off-piste skier and mountaineer

As ski-tours get tougher, undoubtedly the height gain can increase significantly but so can the type of terrain you need to cover to continue on with the tour. Having the skills to deal with steeper ground, both as a mountaineer and as a skier, becomes more necessary. 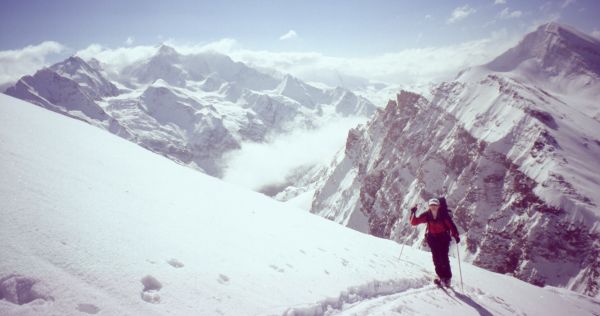 The summit ridge on the Barrhorn, with the Bishorn on the right and the Mischabel chain in the distance

Reliably performing kick-turns in some exciting places and then booting up short steeper sections, wearing crampons, help keep you to continue without having to turn back. Having a plan for negotiating steeper sections in descent, whether that’s knowing you can turn or sideslip down a slope, or whether it would be better to abseil or climb down.

Many more choices and decisions, and skills to be competent in before trying more committing and challenging ski-tours.

So this is where we move into ski-mountaineering, where the skills of the mountaineer play an equal role to that of the skier, and typically a particular journey would be graded BSA (bon skieur alpinist) or higher. 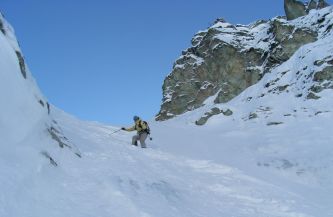 All of the ski-touring areas so far described can have exciting variations that take in trickier peaks and cols. Many ski-mountaineering journeys in the Alps really capture the essence of travelling on skis through an impressive, remote and complex winter mountain landscape, such as the Imperial Tour and the Classic Haute Route, described earlier.

The Écrins Massif with its dramatic rocky peaks is inspiring area to ski through. Traversing over many cols, this is very much a mountaineering excursion where key sections are too steep to keep the skis on.

Many summer alpine peaks become more easily accessible to those who can ski. Skinning up the mountain as far as makes sense, leaving the skis to climb the remaining more technical section without them to the summit. Return back down, collect the skis and feel exhilarated as you ski back down the glacier, knowing it is far better than the walking of the summer months.

The fine mountains of the Bernese Oberland are great for this sort of ski-mountaineering. Challenging and big days out, several of the Oberland giants can be climbed in this way. Linking together mountains such as the Finsteraarhorn, the Fiescherhorns, the Jungrau and even perhaps the Aletschhorn would make a fantastic ski-mountaineering expedition. 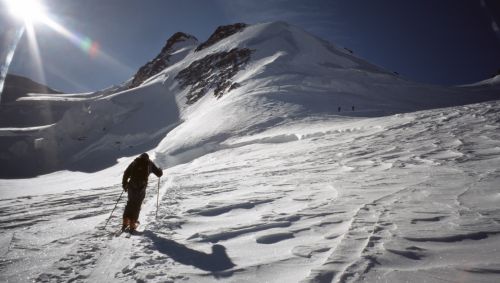 Heading up to the ski depot at the col, before tackling the final ridge of the Dufourspitze

To the south, the Monte Rosa Massif presents similar potential for skiing/peak bagging.

The highest point of the massif, the Dufourspitze, has a long glacier approach before reaching the final exposed snow and rock crest that leads you to the summit. Travelling on skis, skinning up the glacier and skiing back down helps make neat work of this big hill, and the peak can fit in well to a ski-tour in and around this region where there are other peaks and good descents to do.

In this way, the main objective a tour can be just to climb one particular peak. But also, and  certainly for me, it’s to really to seek out a journey that results in a great descent as well. You can often spend a day or even two gaining height, staying in a mountain refuge, getting to the right place, getting to the top, to then be able to kick off in your skis for the descent all the way back down. It all culminates in that one run.

Going on shorter tours of 2-3 days are fun; because you are not so much psyching up for a long journey you can experiment with things a little more and get back to the valley for a good recovery before heading out again. In this manner, lots of great ski trips are available to you.

The ascent of Mont Vélan makes for a fantastic ski-tour that can be done over 2 days, staying at the Vélan Hut at the end of the first approach day.

Relating to the photo above, the next morning the journey starts by heading up the glacier in shadow on the right-hand side.

There is then a short snowy scrambling section that crosses the ridge that cuts through the middle of the picture, over to the glacier that is in the sun that leads to the summit of the mountain.

After enjoying the expanse of the plateau summit, the descent takes a more direct line, slightly to the left of the picture, where a wide couloir permits you to ski between the cliffs and seracs, down to the lower slopes and the valley beyond. 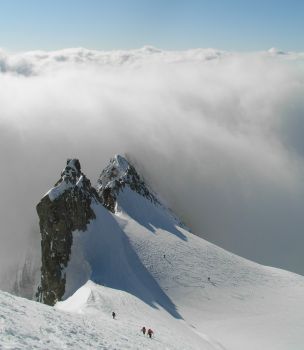 The peak whose summit is the joining of three countries, France, Italy and Switzerland. A beautiful peak, seen clearly at the back of the Argentière glacier, but on skis the approach to the voie normale is on the south side, via either the Swiss or Italian Val Ferret.

The bivoauc refuge Fiorio can be used to shorten the ascent on the summit bid the next morning. Quite steep touring at times takes you to a small col, from where the final slope is climbed to an atmospheric summit. This slope can be quite firm and is a little steep and exposed, so skis can be left at the col, to await the final big ski down back to the valley.

Another fine peak easily viewed from the Grands Montets, this time the approach is from this side.

Can be done in a day from the ski lifts or by staying overnight in the Argentière refuge. From the Argentière glacier there is a long skin up the glacier du Milieu that splits the rocky peaks that make up this mountain. 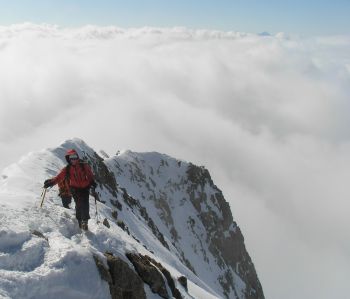 Nearly at the top, Mont Dolent

The final 250m is steeper, starting in a narrow gully and opening out into a bowl, before the final short ridge that leads directly to the summit.

All this is not to difficult to climb but the condition of the snow, and of yourself, will determine the best way to descend this section before the final ski down the Milieu.

Definitely a mountain to do on skis, this massive glacier peak is a really a shoulder of Mont Blanc. The approach is from Les Contamines via a night at the Refuge des Conscrits. Ski-touring all the way to the final crest which is done on foot. The descent can by returning the same way or by traversing the peak to descend a variation called the Divine Carpet.

A choice of routes in ascent, depending on the condition of the mountain, to ski down the Grands Mulets route. As in summer, some sections of the mountain are done as a mountaineer, but making the most of every possibility to use the skis, not least for the great descent. 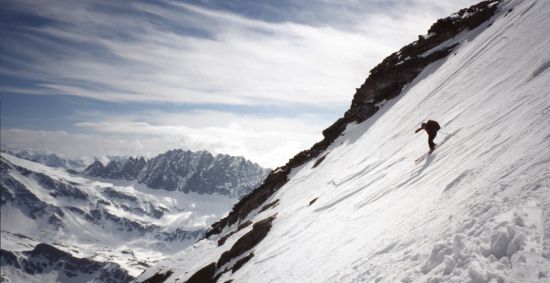