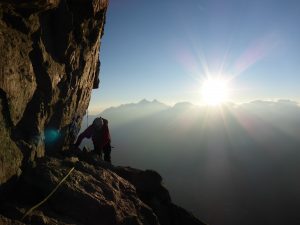 After a cloudy day on the walk-in to the Hörnli Hut the following day dawned to a spectacular start on the Hörnli Ridge of the Matterhorn. 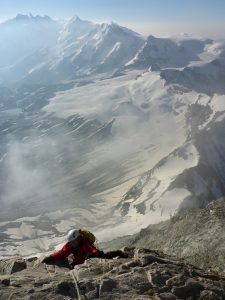 Conditions on the route were dry and we were able to make good progress, moving together and making short pitches over the rocks. 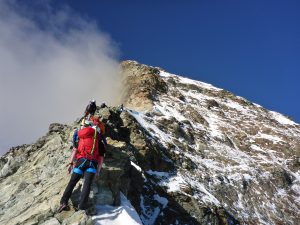 Looking ahead to the section where the fixed ropes started and were we finally put on the crampons…. 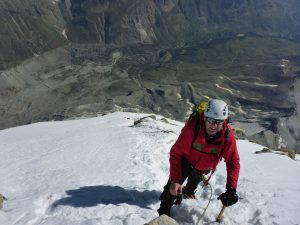 …. and then above the fixed ropes the final upper snow slope was in great condition, with good steps leading up to the summit. 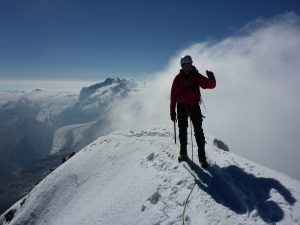 A great achievement for Graham to reach the summit of the Matterhorn!

The highest point on the mountain is the Swiss summit and it can be quite splendid to do the short journey across the rooftop of the Matterhorn to its Italian summit. Quite narrow and exposed, yet with good snow for the crampons, we watched the other half of our team, Chris and Massimo, complete the traverse. 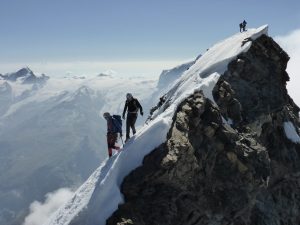 Altogether at the Italian summit, before commencing the big descent back down the Hörnli Ridge. 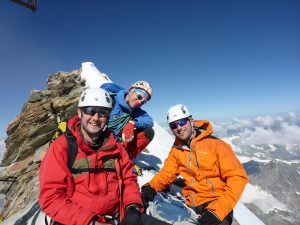 Three days of preparation for climbing the Matterhorn were completed with an early-morning traverse of the Cosmiques Arete above Chamonix. Graham, Chris and I started from the Cosmiques Hut itself (just in the background), avoiding the crowds who would join the route later in the morning. 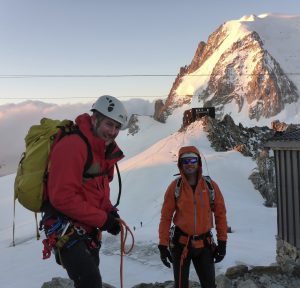 The Cosmiques Arete is a fantastic journey up, down and around the numerous granite spires of the ridge. As well as enjoying the climb, it is a great opportunity to get used to climbing in descent and trying abseils or lowers. 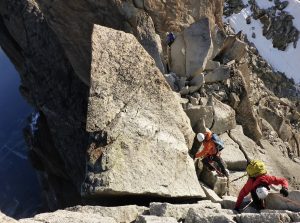 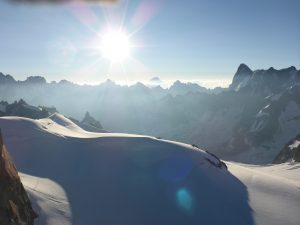 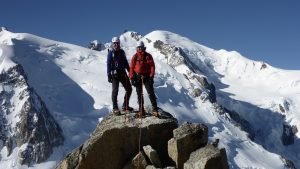 At a few metres shy of 3800m the Tour Ronde is a fine objective amongst the number of peaks accessible from the Torino Hut. With the added height there is still much snow on the ridge, which gives the route a high mountain feel. With a mixture of crampon-ing sections and dry rock climbing amongst a number of pinnacles on the main crest, this route is quite an adventure! 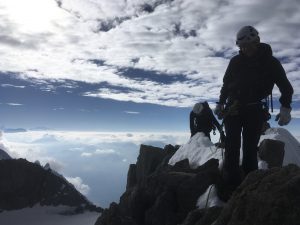 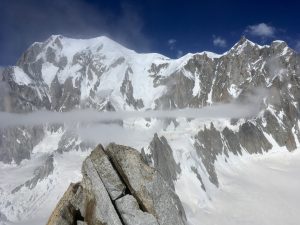 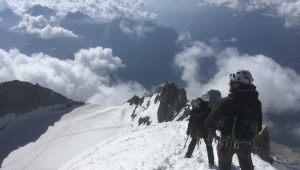 The relatively easy section of the snow dome on the summit, before returning to the complications of down-climbing around the various pinnacles. 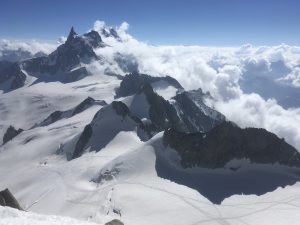 The view to the East, looking down at the Entreves and across to the Dent du Géant and the Grandes Jorasses.

The Perrons Traverse follows an excellent chain of peaks to the north of the Vallorcine valley. The rock is gneiss, the terrain is exciting and technical, both in ascent and in descent, and the views are spectacular. The route is a fine example of an AD ridge without being at the higher altitudes that most alpine ridges of this standard are at. 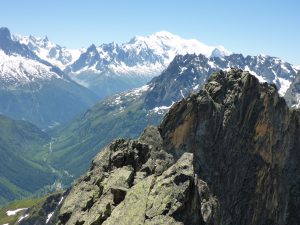 Setting off from the Emosson Dam the approach for this route follows a steep climbers’ path directly up from the dam. With much snow remaining from the spring crampons and axe were needed for a section of this approach, which added to the striking nature of the journey. 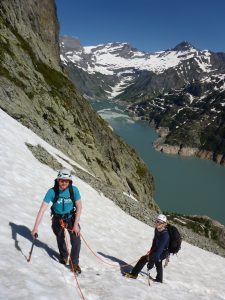 Once on to the main ridge crest the scrambling terrain starts off more gently, leading up to the highest summit, the Grand Perron. From here, however, the journey changes dramatically with a number of abseils needed, some excellent pitched climbing and some great exposure on the more narrow traverse of Pointe Voullioz. This peak is more like a traverse of a great fin of rock, with sheer faces either side but excellent, steady scrambling and easy climbing along the route. 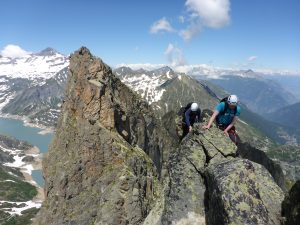 Looking back at the Grand Perron, and the three abseil sections

Climbing back up the other side of the gap 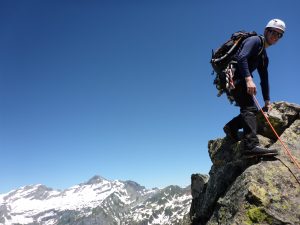 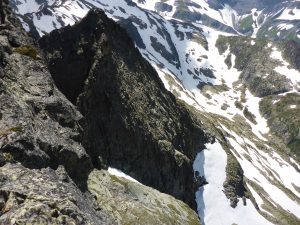 Looking ahead to the final summit the Pointe de l’Ifala 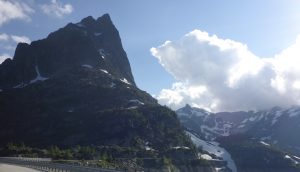 The east summits of the Perrons Traverse at the end of the day, looking up from the Emosson dam