Hut-to-hut ski-tours across the western Alps

The particular style in which the ski touring happens is up to you. You can decide if you’d prefer to have lots of skiing for your up-hill efforts, or you may rather focus on the whole journeying aspect of touring. You might like to do a tour which enables access to some more mountaineering objectives and climb some fine alpine peaks (minus the skis!). 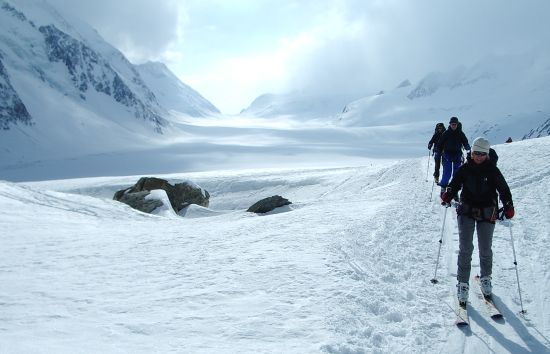 Touring across the Konkordiaplatz, Bernese Oberland

When enough skills and experience have been attained as a ski-tourer then you are ready to try a linked hut journey. Staying continuously in the mountains for a number of days and travelling almost entirely on skis leads you to cover a range of distances and terrain in hopefully the best style.

To begin with, it is good to consider what those skills need to be. Ski-touring guide books have a variety of grading systems that categorise the difficulties to be expected on a tour. For ski-touring objectives in high mountain and glaciated terrain more simply there can be two levels of that describe the skill requirement for most of the touring objectives you are likely to encounter.

SAM = skieur alpiniste moyen (or moderate skier and alpinist)     That is to say you can: 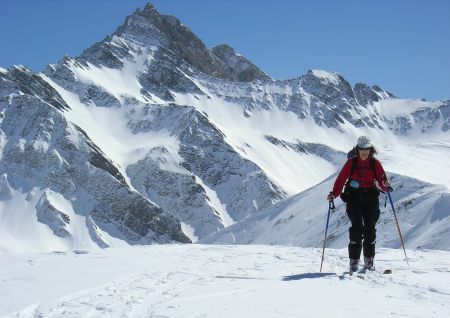 BSA = bon skieur alpiniste (or good skier and alpinist)      That is to say you can:

Having an idea of the skills involved gives you a good idea of what your letting yourself in for when planning a ski-tour. When you have these skills then the following areas can open up great possibilities for ski-touring. There are established ‘tours’ in these mountain regions that make a popular and logical journey through the mountains. Equally there are many other variations and choices to help fine-tune a tour to your own requirements.

The mountain chain of the Vanoise is found to the south and east of the popular ski resorts of Val d’Isère and the Trois Vallées and it extends across to the Italian border. This vast area offers endless possibilities for touring, and is perfect for being of a reasonable altitude, without being too high. To travel amongst many peaks of between 3200m and 3500m with the option of climbing many of them. There is glaciated terrain but it doesn’t dominate the landscape. Indeed it is perhaps the absence of 4000m peaks that keeps the crowds away and saves this area for those seeking fine ski-touring and some great skiing.

Despite the proximity of vast areas of ski-lifts and big hotels, it is easy to escape them and find remoteness and charm. The Vanoise National Park was the first park to be established in France and the wildlife and traditional culture that has been retained really adds to the whole experience.

A high point for those with a little more experience is the Grande Casse at 3855m.

Great skiing through moderate terrain, with fantastic views of the whole western Alps and lovely huts. Again, never too high, so altitude is less of an issue, as is the lack of serious glacial terrain, which allows you to concentrate on enjoying the journey and the skiing. 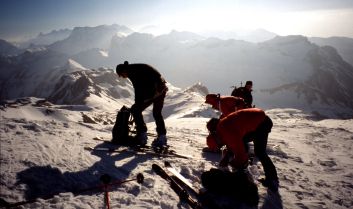 Early morning on the Schnidehorn 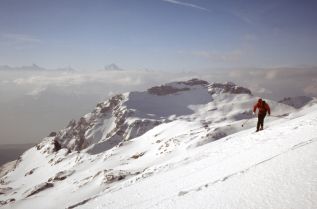 Great skiing on the Wildhorn

Starting at Les Diablerets and making the most of the Glacier 3000 ski-lifts, this ski-tour links the chain of peaks to the north of the Rhone Valley in Switzerland. The tour begins in the Vaud Alps and heads east to finish at Kandersteg in the Bernese Oberland. As such, the tour has to traverse three peaks which is a splendid way to ski-tour. Arriving at the top of a peak amidst amazing views and space, sorting out the ski equipment and skiing down the other side. This adds a bit of commitment to completing the tour, especially as you need to be sure of your basic up-hill skills. Yet as an area for touring the commitment is never too severe as the valleys either side of the chain offer the potential for escape, if it is needed! 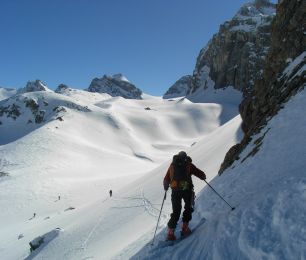 Heading down to the Benevolo Hut

The Gran Paradiso National Park in north-west Italy is a mountain range of high, spiky peaks and deep valleys. Completely unspoilt by the impact of man and ski-lifts, the valleys are supported by small traditional villages and in the springtime there is abundant wildlife to be found on the slopes, such as ibex, chamois and marmots.

Depending on your approach to touring in this region, the ski-touring can range from the pleasant and not too demanding to the very adventurous. 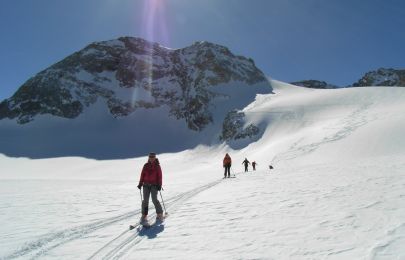 A good ski down from the Punta Calabre

The valleys are generally straight-forward to follow and from some of the mountain huts found at the valley head there is great potential for day trips, using that hut as a base.

Gently angled glaciers lend themselves to fine touring amongst impressive cliffs and peaks. It is when you wish to journey from valley to valley that the fun then begins; you should choose your col wisely!

Route-finding can be difficult and terrain can demand the many and varied skills of the tourer/mountaineer, although this is what ultimately make a tour through these mountains so much more rewarding. 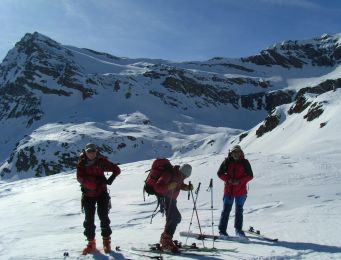 There can often be some exciting terrain to ski through

In making a traverse of the Gran Paradiso National Park, a natural objective for ski-tourers over the course of 5-6 days. The journey can prove to be strenuous and challenging, with some big climbs and long days. However it can be done following a route to suit the abilities the party and still be graded ‘SAM.’

Of course the  natural addition of the Gran Paradiso summit itself at 4061m presents not just a significant challenge but a desirable objective as you can hope for a long ski-descent as a reward for your climb.

A glacier peak all the way to the last 100m makes for an easy climb of 4-5 hours before the final scramble to the rocky summit. 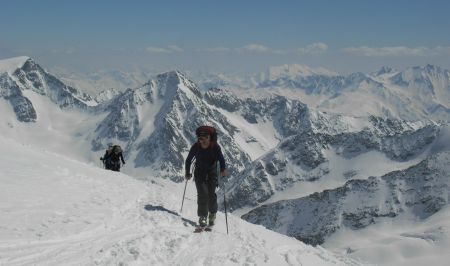 Almost at the top of the Wyssnollen

This vast glaciated landscape is punctuated with so many high alpine peaks, it is a ski-tourers paradise. Indeed, perhaps the only way to visit these mountains at their best is on skis. Many of the peaks are entirely skiable, skinning all or most of the way to the top, with a fantastic descent back down.

The other peaks still remain as 4000m giants, to be stared at by many, yet equally attainable by those with the inclination and some alpine mountaineering skills.

Apart from the great peaks is the great open space. Travelling along the kilometre-wide open highway of some of the main glaciers is astounding, to be a tiny speck of humanity in such a vast space. 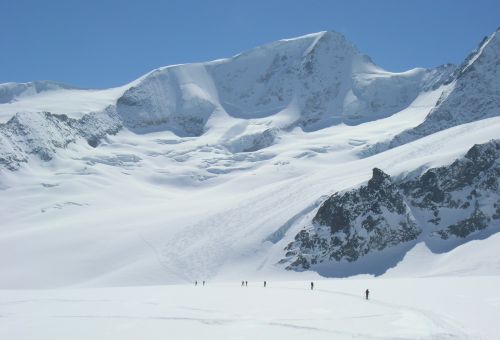 …followed by a great ski downThe Bernese Oberland is a large mountain range in the northern alps of Switzerland, with a massive variety of touring on offer, and as such it is popular to make maximum use of available man-made transportation to help get started… The ‘train through the Eiger’ to the Jungfraujoch, though expensive, is an excellent way to start a tour, not least by allowing a good ski down on the first day with a lot less uphill effort!

The area is well serviced with comfortable mountain huts, and there are many options for tours in circuits or peak-bagging. Again, popularly most tours end by skiing down into the Lotschental to the west, where you can catch the bus and train or the ski-lift and ski back to wherever the tour started from. 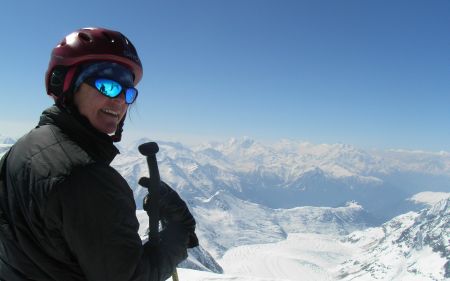 From the top of the Grosse Wannenhorn

A lesser known venue for ski-touring where a set tour has been established travelling between the two valleys of the Val d’Anniviers and the Turtmanntal. Climbing the Bishorn (4153m) is an impressive high point, which can be scaled on skis up until the final 50m.

However, there are many options and variations to this tour that you can have the flexibility of creating your own schedule. There are several options for touring up other snowy peaks, and also for returning to the main valley if there is a change in the weather. 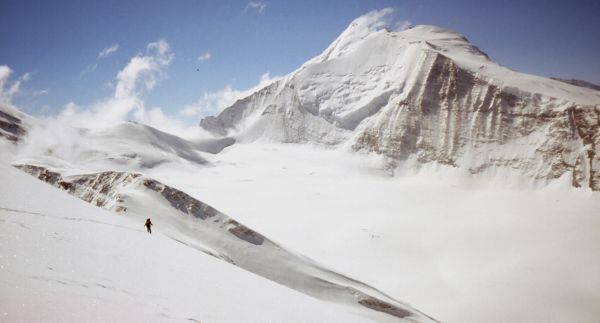 Skiing down the Barrhorn, with the Bishorn beyond, to be skied the following day

It is a remote area, not generally difficult, although there are some key sections to negotiate. An adventurous feel from the start, particularly as you drop into the Turtmann Tal on the first day, ensures you would wish to be completely at one with you ski mountaineering skills before embarking on such an excursion.

Starting from the St Luc ski-lifts at the bottom end of the Zinal Valley, there are a choice of routes to take over to the next valley and on up to the Turtmann Hut. 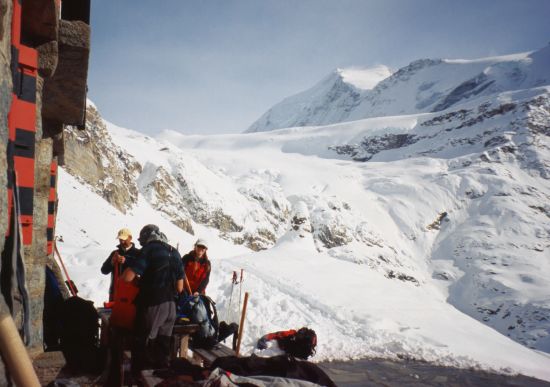 Outside the Turtmann Hut, the gully behind gives access to the upper glacier

This refuge makes for a great base for a number of objectives (such as the Brunegghorn and the Barrhorn) and it can be good to spend at least a couple of nights here before heading to the top of the valley and the Tracuit Hut.

This is the hut from which to start up the Bishorn, a 4000m peak in its own right which is also really a shoulder to great Weisshorn.

An early start for 900m climb up the glacier, the surface can be quite firm. The run back down to the hut is spectacular as you realise this peak is high above all that you can see to the north, a fine reward for your efforts.

From the Tracuit Hut you can extend your descent by another 1500m all the way back down to Zinal, if by now your tour has reached its final day. Alternatively, you can continue south through to the upper Zinal Valley and add a couple more days touring, crossing cols and ascending snowy peaks amidst the grandeur and isolation of the Zinal Rothorn and the Dent Blanche. 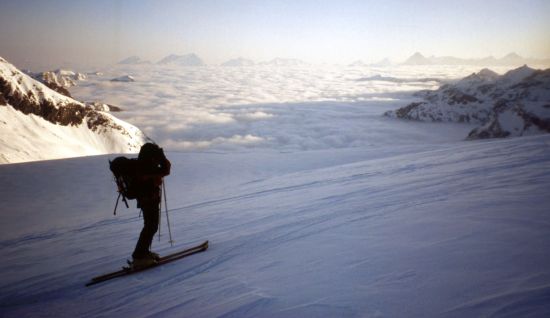 An early start from the Cabane de Tracuit, greeted by a cloud inversion covering the world below

It’s worth spending as long as possible on the ski-tours described, 6 days works well in allowing you to explore these areas reasonably extensively.

Again the ratios depend on the overall ability of the group but 1:6 is good for these tours unless something a little more technical wants to be tackled.

Where and when to go?