Mountain rock routes across the Alps

Where technical alpine mountaineering meets alpine rock-climbing is not necessary a finite place. The equipment and the approach can be virtually the same. Yet perhaps two factors stand out that tell you’re a bit more of an alpine rock-climber. Firstly, that you seriously consider bringing climbing shoes and a chalk bag. Secondly, in choosing your objective you are thinking more about the climb than reaching the summit of a peak. Perhaps this is then the search for good quality rock or the search for fine moves in a stunning location. There are so many moves on these longer climbs that movement becomes a blur of climbing flow, and confidence builds as you scale many pitches on immense towers and slabs of rock. 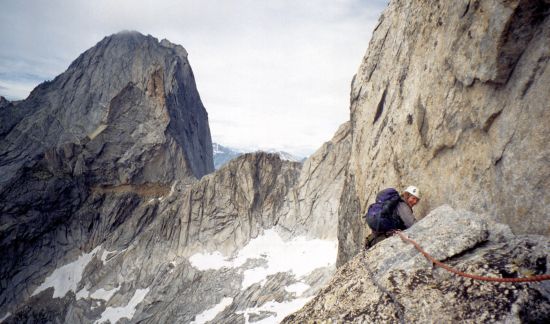 ‘Via Da Vinci’, south side of the Piz Cengalo, Bregalia. The Piz Badile is in the background

There is rock everywhere in the Alps, low down and high up. Near roads and ski-lifts or in remote locations. Above glaciers. Requiring a different journey back down or descended by abseiled. Staying in huts, staying in the valley.

Chamonix and the Mont Blanc Massif

Northern French Alps   This is a  popular destination for alpine rock-climbing and you can understand why! So many routes to choose from and on great rock. With such fantastic situations to climb in, you can forget the busyness of the Chamonix valley. 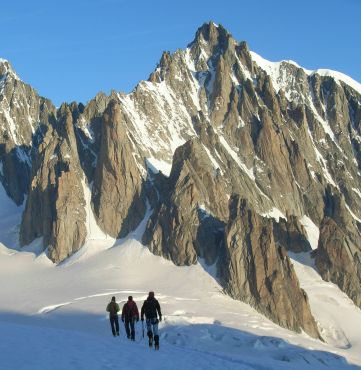 Glacier approaches to the Chamonix granite 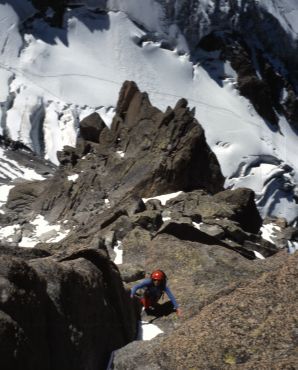 What is particularly special about the climbing experience  in the mountains above Chamonix is the sensation of moving over the golden granite. This is a fantastic rock to climb on. Multi-pitch routes, often in the sun and above the great white of a vast glacier. It is a really amazing environment that is not often found so accessibly anywhere else in the Alps.

Southern French Alps   In the region of the Écrins Massif the mountain village of Ailefroide is a lovely valley base for all kinds of rock-climbing adventures. No lifts, mostly simple accommodation and a popular campsite, the whole tone of this place is of escaping from the noise of roads and tourism and sharing the adventurous nature of these peaks with like-minded folk.

There are many multi-pitch valley crags with excellent rock and on a variety of features to climb. Big slab climbs, pinnacles and small peaks, and at whatever scale and difficulty you would like to try next. Before you know it, some of the bigger climbing objectives will be winking at you, and there are many to choose from… 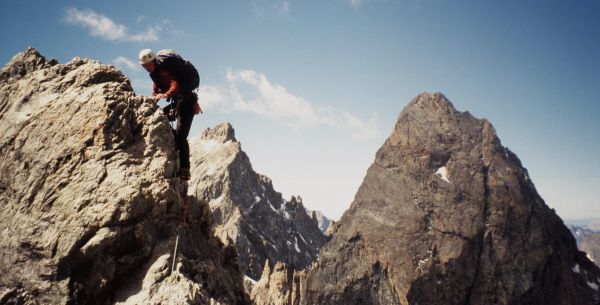 Traversing amongst rocky spires in the Ecrins

Miroir d’Argentine, Grand Muveran and Sanetsch  You will find these big limestone cliffs all tucked away in the relatively low-lying mountains to the north-east of Martigny. They have many great routes with an adventurous feel and at all grades.

Jägihorn/Dri Horlini and Wiwanni/Stockhorn   Further up the Rhone Valley, these are two of the best mountain rock-climbing areas, on gneiss and on limestone. You can achieve these climbs by staying in a mountain hut as a base for the climbing and create mini-expeditions.

Between Meiringen and Grimsel Pass   Many, vast granite walls at all altitudes that could last a lifetime of slab-climbing holidays. Complimented by the limestone peaks of the Engelhorn for those who prefer to have more holds…

Salbitschijen An adventurous peak with the best quality granite. The routes make use of starting from one of 2 mountain huts. The South Ridge is a good first excursion to do here and is a fine example of rock-climbing taking you to the summit of a spectacular peak. 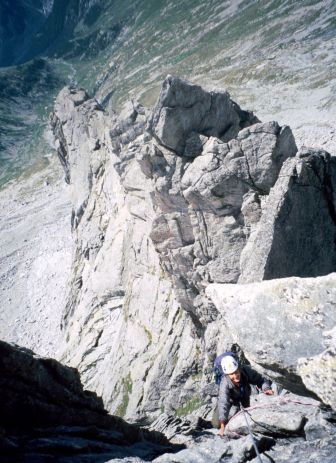 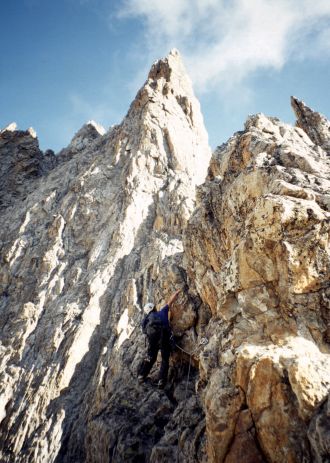 Traversing over 5 towers on the Stockhorn

South-east Switzerland/Italy A very impressive rock landscape where the main peaks appear in a variety of striking geometric shapes that are unlike any other chain of peaks in the Alps. Again, you will find all scales of objective here, from the multi-pitch mountain cragging at Albigna (with helpful cable car access) to longer multi-pitch routes and adventures such as those on the Sciora Peaks (hut needed and a big day out). Then of course there are the peaks that dominate the view, the Piz Cengalo and the Piz Badile. Big rock-climbs in an alpine setting.

The south side of the Piz Cengalo, and the prominent ridge of ‘Via Da VinciApart from the Albigna chairlift, all the access to the climbing is on foot, with some substantial hikes into the mountain huts in this area. This adds to the ambience of the climbing here, the away from it all. That by putting the effort in to reach these route, you’ll get so much more out of them.

North-eastern Italy   You can’t talk about alpine rock-climbing without mentioning the Dolomites! Many towers of limestone, routes of all grades, though most of the best ones are quite long. Normally, limestone doesn’t lend itself to the easier grades in climbing, yet here, this is untrue. Good solid rock, big holds (if you want them) and fantastic exposure and situations, as routes that are the equivalent of VDiff wide their way up a 600m cliff.

A great place for a climbing holiday, naturally good food and places to stay, and many good routes to choose from to help you explore the whole of this sizable mountain region of Italy.

As has already been mentioned, alpine rock-climbing is supported by the network of mountain huts. Many of the venues can be relatively unfrequented but yet a hut is provided by the alpine club of that country. So you can find yourself staying in some amazing establishments perched on the mountain landscape, some still traditional, chalet-style, others quite new and modern. 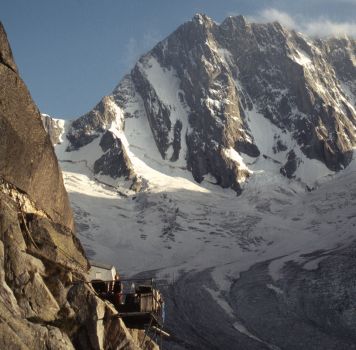 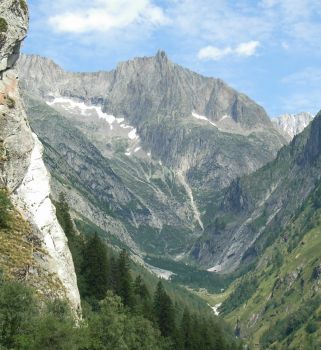 The Stockhorn, Bernese OberlandSome of these refuges are guardianed, yet a number of the huts will be un-guardianed bivoauc refuges. Although basic and self-catered, generally (depending on the country) these huts always have blankets and usually some method of heating water. Undoubtedly they add to the alpine climbing experience, staying in a ‘den’ high up in the mountains, but only as long as you are prepared for the on-sight facilities! 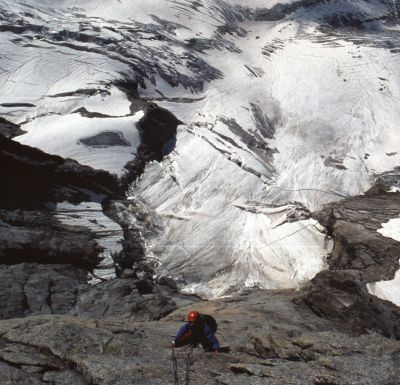 Looking down 600m on the Petites Jorasses

Being prepared for what the whole of an alpine climb involves is everything with regards to your chance of success and enjoyment. Obviously, compared to just going cragging there are two main things to consider. What you’re going to have to carry and how are you going to get back down.

Many of the longest climbs in the Alps are equipped for an abseil descent. This can be back down the same route or by another descent off to the side. What you carry on your back often depends on whether you will need your hiking boots (and sometimes crampons and axe) with you for the descent, as well as food, water and spare clothing.

What you carry on your back becomes a fine art!

It is worth setting aside 5-6 days to allow for a consolidation of skills and experiences, particularly if you are keen to try climbs at altitude. There are, however, many options for rock routes at lower altitudes.