In winter, icefall climbing abounds through all of the Alp. Every steep-sided mountain valley with waterfalls in the summer will have icefalls to climb on in the early winter months. Close to the road, often with abseil descents, icefall climbing can be the winter equivalent of sport-climbing. 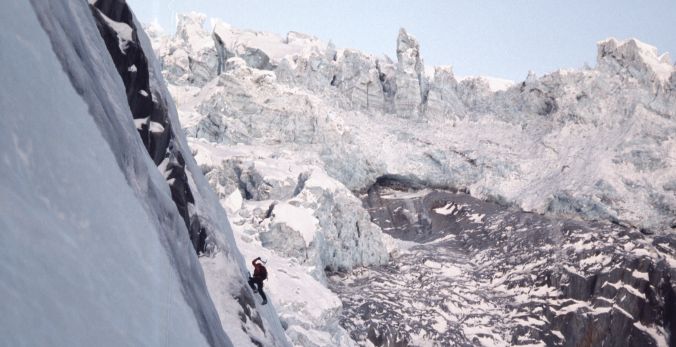 Up in the mountains, climbs of ice and snow use the same skills you use on the valley icefalls.

Thin lines of ice make impossible cliffs climbable, fields of ice and snow make huge north-facing mountain flanks flow by in a sweep of steady movement. Compared with making individual moves on rock that may be different, climbing ice and snow is really about making the same move over and over again, but with complete confidence because each of the holds you make yourself. What you lose in technical interest, you gain in the sense of commitment and being able to scale a vast mountain feature.

This is demonstated in the grades given to ice routes, where the technical part to the grade can be low in relation to the overall grade (seriousness and commitment).

However, climbing alpine ice also compliments climbing alpine rock because generally they are each best climbed at different times of the year. Ice routes generally depend on the amount and condition of the snow that has been plastered onto the route that has then formed into névé.  Depending on the weather and conditions, a route can ready from mid-winter onwards, right through to early summer when the summer heat will then begin to make the routes unclimbable and dangerous.

Routes to get started on

By far the best location to get into alpine ice is around the Mont Blanc Massif, where the Midi and the Grandes Montets lift systems open up great playgrounds for ice-climbers. Not for the novice, it’s good to acquire good movement skills on ice back down in the valley. But once you are ready, the challenges await! 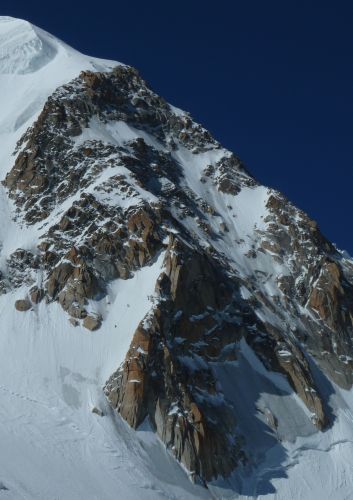 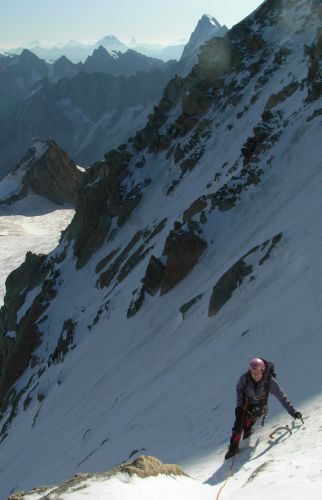 At last, in the sun!

The triangle face of Mont Blanc du Tacul is a justifiably popular first destination in this area. There are several routes to choose from that are predominantly on ice with some rocky sections, and there is also the Cheré Couloir, a gully that is a little too popular, but a good climb of around five pitches. Abseiling back down the Cheré Couloir

Perhaps the key attraction of these routes and many others around the Mont Blanc Massif is that they are equiped with fixed protection for an abseil descent. This helps the team with the logstics of climbing a route. Many of the routes on the Tacul can be done in a day round trip from the Midi lift.

Also, they can be approached on skis when the snow is too deep for walking, abseiling back down to your skis to then perhaps finish skiing back down the Vallée Blanche…! 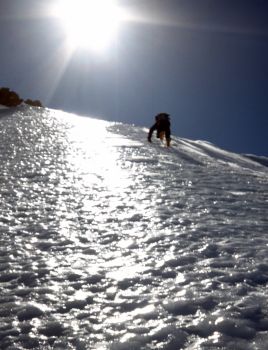 However, as with most ice climbing, it’s good to get started and off the route before the day warms up.

Staying in a mountain hut always allows a good early start and a chance to climb to the top of the mountain, completing the alpine climb in a more satisfying way.

Beyond the triangle face of the Tacul, there is much more for you to explore, both literally further down the glacier and also above the Argentière Glacier. With access by the Grandes Montets lift, where there are a number of good ice routes and impressive North faces for you to aspire to.

What to try next? Across the Alps

Tour Ronde, North Face, 350m A striking-looking face that has a good amount of steady ground, with a steeper icy section of a couple of pitches in the middle. Very accessible from the Helbronner lift system, a great early route to try on this sort of climb>

Gran Paradiso, North Face, 400m A slightly bigger project to venture onto, and a grand way in which to climb a 4000m peak.

Pigne d’Arolla, North Face, 300m A snow and ice face that you need to climb early in the season. Seen clearly from the village of Arolla, undoubtably the best climb on this peak.

Lenzspitze, NE Face, 500m The Dreieselwand, a very elegant face on this peak that is at the northern end of the Mischabel range. The angle begins at 45 and finishes at 55.

Before making an ascent, it’s worth considering the best options for the descent… NNE slope of the Courtes, Argentière Basin

It is worth setting aside 5-6 days to allow for acclimatising and for a consolidation of skills and experiences.