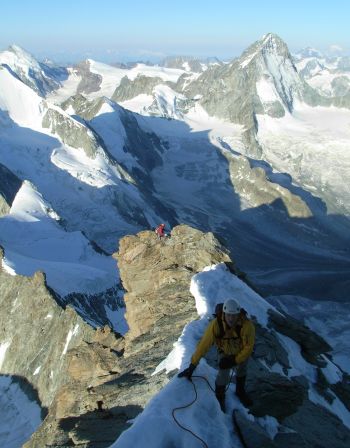 Nearing the top of the Zinal Rothorn

Here are a selection of some the best classic, more challenging outings the western Alps offer, to give you an idea of what is out there. The routes are predominantly rocky ridges in which some have significant mixed sections on snow and ice or where there are exposed snow crests to negotiate.

Climbs that focus more particularly on just rock or ice climbing can be found on subsequent web pages in this chapter.

The skills required for these routes are of the competent scrambler/climber, with steady experience of ice and snow craft and a good aerobic fitness. Beside the route names are alpine grades (PD – peu difficile, AD – assez difficile, D – difficile) that relate to the overall difficulties to be expected on the ascent and descent.

As technical alpine climbs gain in difficulty, it is not just the technical difficulty of the individual moves that increases. On climbing a up such a route, there can be sections in descent or by traversing. Negotiating these can be frequent and need to become part of the flow of the journey. Often the moves can be straightforward yet it is the situation that is more challenging and you need to adapt well to down-climbing and abseiling.

Many of the routes described are the voie normale (the ‘normal way up’) of that particular peak so there is not an easier route by which to descend the mountain. Descending this route can therefore be just as interesting if not more so than the climb and it is always to take this into account.

A straightforward mountaineering approach is followed by a fine and exposed rock-climb that takes you directly to the summit of this, one of the most striking of 4000m peaks in the Mont Blanc Massif.

The classic and most popular route to the summit of this beautiful peak. The couloir is a steady climb, steepening towards the top before the final snow crest that leads you to the summit.

A good introduction to alpine rock in this area, technically interesting, though not too long or difficult.

A fine and popular traverse in a stunning situation. Not technically too difficult with a variety of both rocky and icy/snow terrain to cover. Not to be under-estimated either as in effect you do the traverse twice, returning back along the ridge from the prominent Aiguille de Plan to the Midi.

Another beautiful mountain, a steepening glacier approach takes you up to the arete which is followed by crossing or turning past some interesting rocky obstacles in a fine aerated position.

A grand day out, never too difficult but always a good long expedition.

More simply this journey takes in the Aiguille de Rochefort; with more time and commitment, the further peaks of Mont Mallet and the Dome de Rochefort can be added. Very elegant and always exposed. 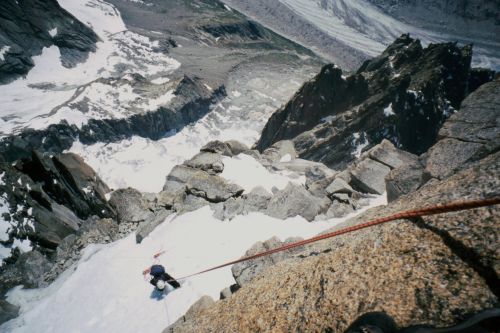 Descending the south side of the Petit Dru

One of the finest ridges in the range; a long, mixed route at a high altitude. In magnificent surroundings, with two vast spaces either side, this ridge takes you the flank of Mont Maudit.

The traverse from this peak to the Dômes du Goûter is the key section of the grandiose traverse of Mont Blanc, an expedition taking 3 days and a fine way to experience the whole of the Mont Blanc Massif.

Many of the peaks in this area are less than 4000m, which allows you to concentrate on technical difficulty with altitude being less of an issue. 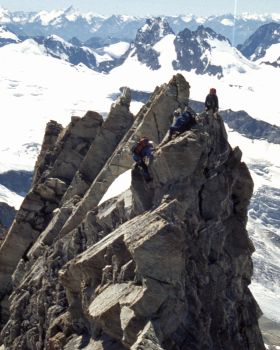 Exciting traversing on the Grand Cornier

One of the most beautiful peaks of the alps and always an interesting challenge to climb. After the initial approach the ridge is exposed and has some fine climbing and interesting situations to solve, not least wondering how the descent by the same route may happen. A highlight in anyone’s alpine career.

If the logistics can be organised to connect the start and finish of this traverse, a spectacular journey can be achieved which is less frequented due to the Grand Cornier being just short of 4000m in height. Not striking in its self as a peak, but the views, the scrambling situations and exposure make for an unforgettable alpine adventure.

A splendid package of an alpine journey! Great climbing, spectacular situations and a relatively straight-forward descent down the north side. Never too long or sustained, a good objective for the technically competent early on in their alpine career. 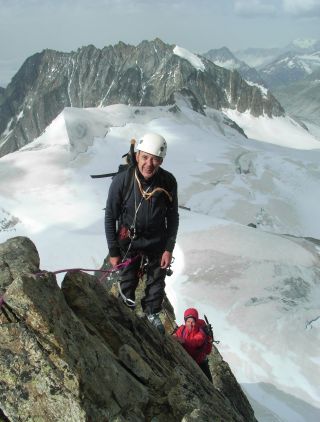 The rather exposed section on the SW Ridge of the Evêque

A classic excursion, a striking peak when viewed from the base of the Cabane des Dix, this traverse takes the sky-line ridge.

A fantastic rock-climb on good rock, and good to combine with the short final ascent of the Aiguille de la Tsa, to finish on this striking peak.

These peaks are mostly over 4000m and for half of them, they are complicated mountains where the standard route up is a demanding challenge.

The mountain that speaks for itself! Most popularly climbed via the Hörnli Ridge, in ascent and descent, yet an ascent of the Italian Ridge makes for a memorable traverse with finer climbing sections and is less busy. See the separate section for the Hörnli Ridge route in the next webpage.

Approaching from the Zermatt side, the SE ridge is an interesting and varied climb. Combined with an ascent or descent of the North Ridge a grand traverse of another spectacular alpine peak is achieved.

One of the most demanding 4000m peaks to reach the summit of. The voie normale is the East Ridge, a long and tricky ascent, faced equally in descent; a truly rewarding summit.

With a mixture of rocky and snowy terrain to be ascending and a simple descent to follow. This route lends itself as a good introduction to the style of ridge climbing in this area.

Sunset on the Zinal Rothorn and the Obergabelhorn

An excellent rock-climb on this prominent spur. Relatively short as a route but at a significant altitude, and potentially the finest way to reach the summit of Monte Rosa.

An eye-catching objective that links the 2 summits of Liskamm, both of which can be climbed more easily independently. The connecting ridge is a narrow snow crest, a serious proposition that requires good footwork and a steady nerve.

Breithorn, Half or Full Traverse  AD

A fantastic journey on rock and ice in spectacular surroundings. The Half Traverse is more a rocky climb, on good rock. The Full Traverse adds a very exciting beginning, traversing ‘the Twins’ by means of exposed snow and rock sections, and short abseils.

A good, long scramble, with exposure and some interesting sections in ascent and descent.

A companion route to the one previously described, yet this ridge feels much more of a rock-climb with its slabby walls and delicate climbing sections. Deceptively long, good to have the voie normale to look forward to on the descent.

Another great climb of a similar style, good climbing on rock slabs in a fantastic location. 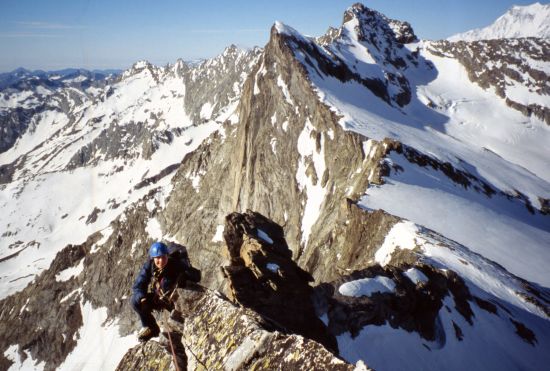 On reaching the initial crest of the Portjengrat

It is worth setting aside 5-6 days to allow for acclimatising and for a consolidation of skills and experiences.